Mt Langley is named after Samuel Pierpont Langley, but it was most likely first climbed by the Indians. The first white man to ascend the peak was William Bellows in 1864. Mt Langley is the southernmost of all the California fourteener's, and has a great vantage point from the summit for viewing the southern Sierras. Having climbed Mt Langley three times, I consider it along with White Mountain, to be a great start for anyone eager to climb a fourteen thousand foot peak in California.

At 14,042 feet, it ranks as number eleven when lined up against the other fifteen California fourteener's. Though Mt Langley can be easily accessed and climbed from the beautiful Cottonwood lakes area, the peak also sports other opportunities for very challenging climbs on the North and South facing walls. Above, you see Mt Langley as viewed from the Owens Valley in the winter. 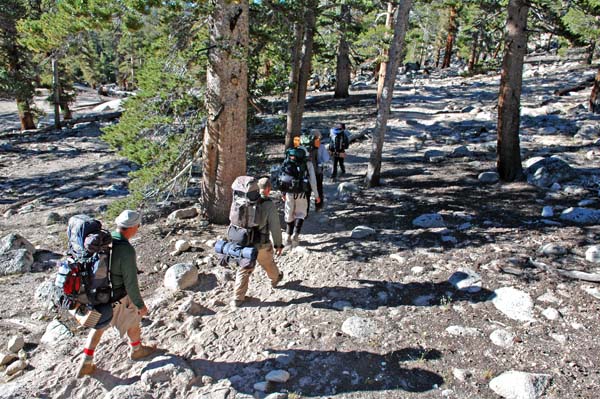 The trail that leads nearly to the top of Mt Langley is well maintained, and is a pleasure to hike or backpack on. I say nearly to the top, because the last 300 vertical feet is accomplished with a class 2 rock scramble.

To the left, Above, you see backpackers traveling on the lower section of the Cottonwoods Lakes Trail. The trail is fairly level for the first few miles, but then turns upward and gains about 1,200 feet before reaching the Cottonwood Lakes/Meadow area. You also get a nice high start on Mount Langley, because you can drive your vehicle all the way up to a 10,000 foot above sea level parking lot. 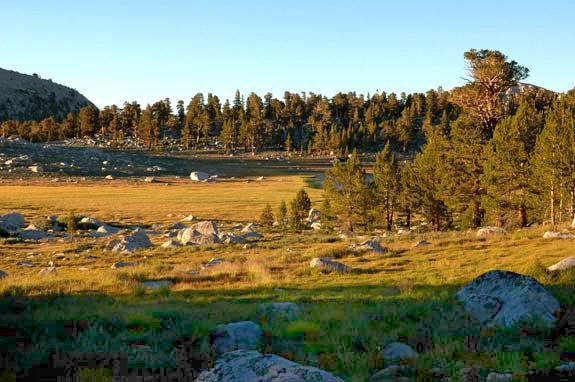 Cottomwood Lakes Basin in the photo to the right above is an example of the terrain in the summer months. In the spring months, things are beautifully green.

Having been to the top of all of California's fourteen thousand foot peaks, I have to say that Mt Langley has one of the most beautiful approaches.

Timberline (where trees no longer grow) in the southern Sierra Nevada is located at an approximate elevation of 12,000 feet. The Cottonwood Lakes Basin is located just below that elevation so that is why is is called a sub-alpine meadow. 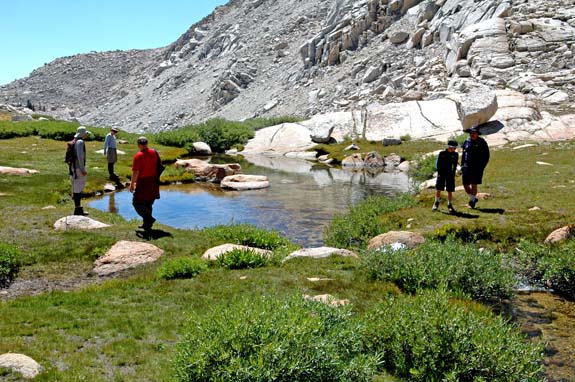 In the image to the left above is an example of an alpine meadow on Mt Langley. Another interesting feature is the small little pond like water source that also appears in the image. These small little high altitude lakes or ponds above Timberline are called tarns.

The word tarn is derived from the Old Norse word tjörn meaning pond. Its more specific use as a mountain lake emerges from the commonly used term for all ponds in the mountainous areas of Northern England, particularly Cumbria.

These little high altitude tarns on Mt Langley make for beautiful places to take a break or have lunch. These little jewels up high on the mountain are what make all the work getting there so worthwhile.

Later in the season these little ponds (tarns) will dry up, so I always recommend doing adventures in the southern Sierra in the months of June and July when things are still nice and green and the water levels are typically at their peak. But as clean as these water sources appear, it is always a good idea to filter the water sources for drinking. For much more on this, see our page on Water/Dehydration. 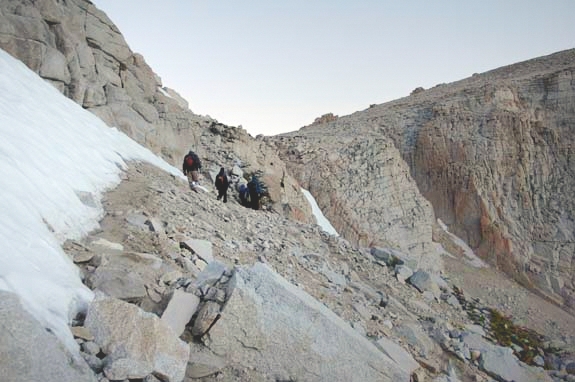 In the image to the right, above, you see hikers approaching the Old Army Pass well above Timberline. The trail from the Cottonwood Lakes Basin to the top of Old Army Pass is unmaintained, and can get a little rough here and there, but overall, it is in good condition.

In early season, snow can present a problem, and crampons and ice ax will be necessary if snow and ice cover the trail. But as the year wears on, the snow and ice melt out, and most folks have no problem reaching the pass using this trail.

We went to the top of Mt Langley in August of 2006, and as you can see, there is still some snow on the trail. 2006 was a particularly heavy snow year, so conditions can vary greatly from year to year. But as stated above, June and especially July provide a great mix of good trail conditions along with plenty of water and greenery. 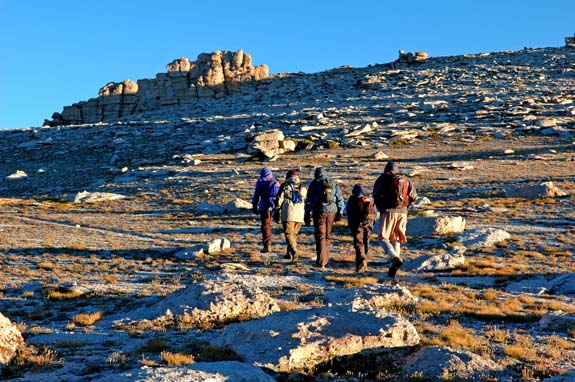 The photo  to the left above shows hikers now above Old Army Pass traversing the near level section of trail that leads to the class two scramble to the top of Mt Langley's 14,042 foot summit.

You are now above 12,000 feet, and the landscape begins to resemble something like the moons. Very barren except for the toughest of plants. I saw a lot of lichen along the path, growing on bare rock.

Lichens do not have roots and they do not need to tap into continuous reservoir of water like most higher plants. This means that they can grow in locations where is would be next to impossible for most plants survive. Places that offer nothing more than bare rock, or sterile/sandy soil do just fine for lichen. High altitude conditions can be ferocious not only for plant survival, but for all living things in general. 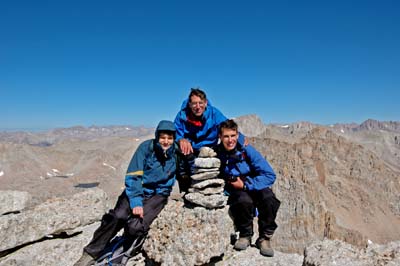 High altitude air is also very dry. So make sure that you have enough water along. Many hikers/climbers underestimate these dry conditions, and fail to carry along enough water.
To the right Above you can see myself and my two sons Ben and Sean (going from left to right) on the top of Mt Langley. Langley provides a great view of the south Sierra in all directions from the summit, including the Mount Whitney group, the Great Western Divide, Olancha Peak, and Owen's Valley.
Just over Sean's left shoulder you can see Mount Whitney in the background. Mt Whitney is the next peak over 14,000 feet as you travel north from Mt Langley. It is the highest peak in the lower 48 and is the most sought after peak in the United States. It also has a trail that will take you all the way to the top, and I would highly recommend it as a great adventure for all you Mountaineer's out there. 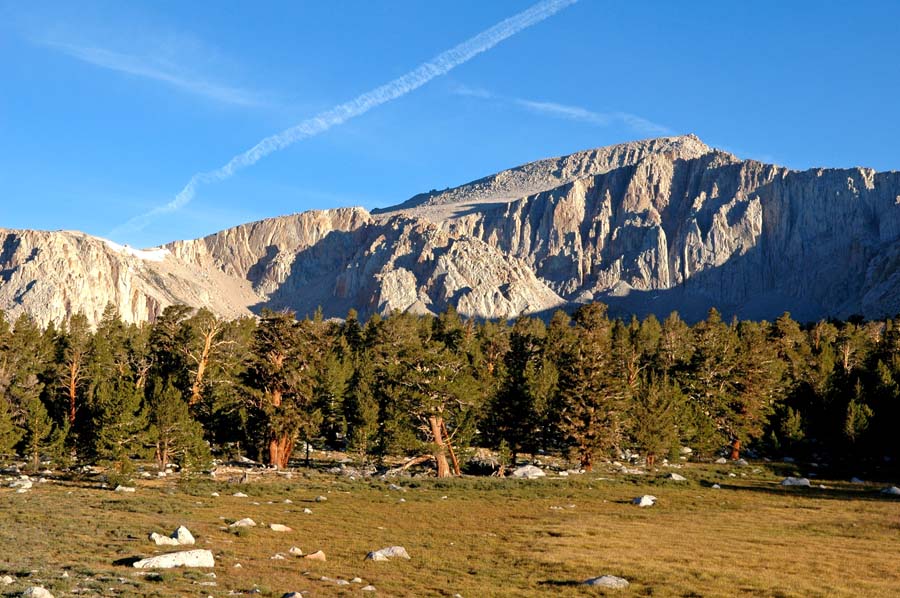 Psalm 36:6-7
Your righteousness is like the mighty mountains, your justice like the great deep. O Lord, you preserve both man and beast. How priceless is your unfailing love! Both high and low among men find refuge in the shadow of your wings. Email Sign Up