North Palisade - tops out at 14,242 feet and is the third highest peak in the Sierra Nevada after Mount Whitney and Mount Williamson. North Palisade was first climbed on July 25, 1903 by James Hutchinson, Joseph LeConte, J. K. Moffitt, and to this day, it is still one of the most sought after summits in all the Sierra's. It is considered by many to be one of the finest climbs in all the range, and consists of all the components of a classic alpine climb. 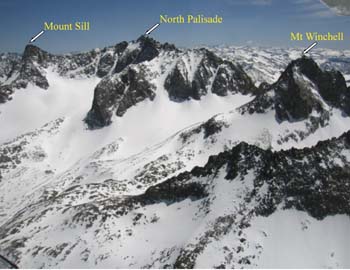 North Palisade is just one of the many fine climbs in the area, and those who specialize in ice climbing will find nearly unlimited challenges in the many steep couloirs the region has to offer. The V-Notch couloir sports a 50 degree angled gully that becomes rock hard blue ice by the time September October roll around. The U-Notch which is the snow gully to the right of V-Notch in the photo above can offer both an excellent 45 degree snow and ice climb in early season or a fine ice climb in later season.

To the right of the U-Notch is the challenging Clyde Couloir. We just recently watched climbers from our high camp on the Palisade Glacier tackle this gully by viewing the light of their headlamps as they slowly made progress (at 3AM no less) in the starlight early morning hours.

Northwest of the U-Notch is the Underhill Couloir. This is also a very challenging high angle gully. There are other snow and ice climbing possibilities such as the North Couloir on Thunderbolt Peak, but I am sure you get the picture.

These peaks make up eight miles of the Sierra Crest, and the two miles of Peaks from Mt Sill to Thunderbolt peak make up the highest continuous ridge in all the Sierra Nevada Range. The smaller aerial photo above (taken by Mike Koerner from his glider plane), gives you an excellent view of the region. This image was taken May 6, 2007. The winter of 2006-2007 was a low snowfall year, but as you can see even in a light snow year, there is usually plenty of the white stuff in the area. Most all you see in the photo above is part of the alpine zone in the Sierra Nevada. This zone is above timberline, and is certainly treeless due to the scant soil and wind swept slopes. 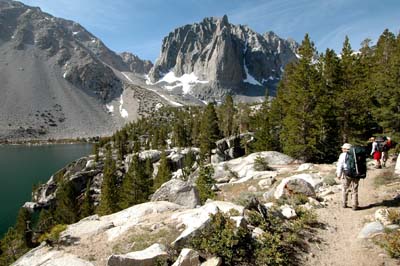 Winds traveling upslope, afternoon thundershowers, lightening (during the summer months), along with cold temperatures at night are common in this area of the Sierra. On our late May trip up Polemonium Peak (just to the southeast of North Palisade, we experienced huge temperature swings on the Palisade Glacier. They ranged from 80 degrees Fahrenheit during mid day to 14 degrees Fahrenheit just before dawn.

It is simply amazing that more snow does not melt during these peak daytime temperatures, but the innumerable surfaces of the snow reflect more sunlight than they absorb, thus, the need for ample amounts of sunscreen. I remember on one outing in this area when both my son Sean and his friend Matt nearly had their face and lips burned right off their faces because they failed to use proper sun protection.

Getting started on North Palisade involves enduring dry slopes on the South Central portion of Sierra Nevada. Even though the trailhead begins at about 7,700 feet, it resembles more closely the foothill belt of the Sierra rather than the Upper Montane Belt that is more characteristic of the proposed elevation. Dense shrub assemblages dominate rocky soils and warm temperatures will quickly prompt you to shed clothing as you begin your journey up the mountain.

The photo to the right above shows the beginning trail marker that leads out of the hiker/climbers parking lot. After passing a horse corral you will begin one of the longest traverses in the Sierra Nevada Trail system.

During the summer months, it is a long hot introduction into the North Fork drainage area of the Palisade Crest. If you can arrange your trip to start in the evening, you can avoid the unpleasant daytime temperatures and complete this section in the cool of the night with headlamps. 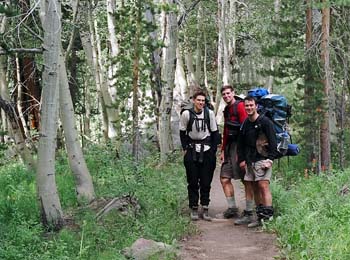 The long traverse across the dry slopes then gives way to a short series of switch backs that then empties you out in a forested area that dawns beautiful wildflowers in season, and pristine young aspen trees as shown in the photo to the left above . This level section is a welcome break from the hot dry slopes below and is a fine area to set up camp in if you made use of the cooler night time temperatures to begin your approach to the Palisade climbing area high above.

Rockfall is always a problem in the Palisades, and stained areas of snow and ice in the couloirs give clear evidence of this ever present danger. I remember a time when ascending the U-Notch, when cannon sized balls of rock, rocketed down the couloir at amazing speeds. We had gotten a late start that day, and seeing that, prompted Mike Husovich and myself to get out of the couloir as soon as possible. Getting hit with rock missile such as that would certainly ruin ones day (or life) to say the least. This supports the old mountaineer's adage "That it is always latter then you think in the mountains." Early starts on a nice cold crisp morning are the way to go not only in the Sierra Nevada Palisade's, but throughout all the mountainous regions of this earth. 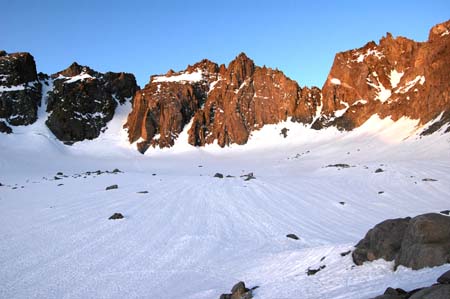 People often confuse directions in this range by thinking that the U notch couloir faces east, but it actually faces north. This means that the ridge is actually running from east to west. As mentioned above, the Palisade Glacier (as seen to the right) is the largest glacier in the Sierra Nevada Mountains. But even this being so, it presents very little difficulty to the mountaineer.

Having crossed this glacier many times, about the most troublesome feature (during some years) has been deep sun cups (photo below). Other than that, the glacier had no crevices of any magnitude to speak of, and even the bergschrund can usually easily be passed without too much difficulty in early season. But nevertheless, care should always be taken.

On our last trip on the Palisade Glacier, my climbing partner Mike told me that he felt the snow bridge vibrate when my son Sean kicked a step into the hard packed snow. If the bridge would have collapsed, we would have most likely found ourselves jammed in the crevice of the bergschrund below. Not a happy thought.

There are several less noteworthy glaciers in the area, the most notable being pocket glacier below the northeast face of Mt Agassiz. Others discount this, and consider it to be just part of a lobe of the main Palisade Glacier. Still others have renamed it Thunderbolt Glacier.

So as you can see, there is still some controversy as to the naming of some of the permanent areas of ice and snow in the area. Well, that's about it for our introduction to the North Palisade in the Sierra Nevada. For much more on this beautiful peak, use the menu above for more adventure on North Palisade!