Mt Whitney Trail Crest - is arguably the most spectacular vantage point of the entire Mt Whitney Trail. It is the perfect place to take that well deserved break after having negotiating all those switchbacks that lie between Trail Camp and Trail Crest. 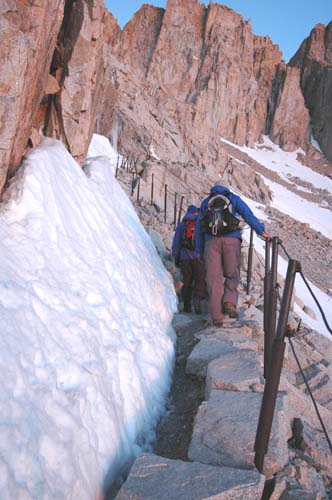 The only obstacle between the above two points is the cables section shown in the photo to the right above during early season. Snow and ice have a way of collecting in this area and care needs to be taken so as not to slip. In the right hand above photo you see hikers negotiating this section of the trail. The cables provide a good handrail of sorts but during the spring months crampons and ice ax may be needed.

The trail now crosses the summit ridge and enters into Sequoia National Park. Once you have gained the crest you will have completed 8.2 miles from the trailhead and you will be standing at 13,700 feet above sea level. Once there it will seem like you are standing on top of the world.

The Great Western Divide, which is due west from the crest, is just part of the scenery along the final 2.8 miles of the trail. The Sierra Nevada above 13,000 become a land of rock and ice. Fantastic columns of sheer granite make for incredible sights as you continue toward the Summit of Mt Whitney.

Some people worry about falling on the backside of Whitney, but even though the views can be very airy the trail is plenty wide and you would have to wander off the beaten path in order to put yourself in any danger. 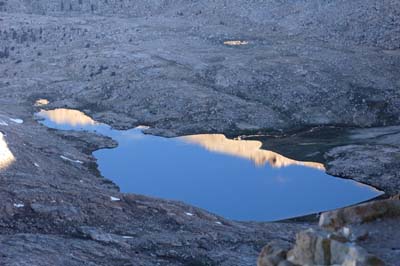 Probably the most famous view from Trail Crest is Guitar Lake. As you can see to in the upper right photo, the lake is well named. Guitar Lake resides in Sequoia National Park at 11,600 feet (2,100 feet below Trail Crest).

The Great Western Divide keeps the Trail Crest visitor from viewing the portion of Sequoia National Park that contains the Giant Trees that people from all over the world come to see. I have been on the western side of Sequoia many times, and now and then I have folks ask me if Mt Whitney can be seen from there. Certainly one of the most beautiful panoramic views anywhere, is of the Great Western Divide near Tawny Point. But it is this divide that blocks the visitor on the west side of the National Park from seeing Mt. Whitney.

If you have the time and skills there are several interesting side trips that you can do which are located near Trail Crest. The Trail Guide section of this site on Mt Whitney describes probably the most interesting side trip, and that is the climb up Mt Muir. It is only a few hundred vertical feet above the main trail, and the side trip is an excellent way of bagging another California 14er if you are interested.

There is also some interesting bouldering in the area. The photo to the right shows a couple of scramblers having some fun on one of the rock outcroppings near the main trail. But if you do wander off the trail there is risk involved. So if you have any doubt about the safety of any extra curricular activity, it would be best to skip it.

In the above photo you can see Hitchcock Lake reflecting the peaks that make up the Great Western Divide in Sequoia National Park. The divide separates the watersheds of the Kaweah, Kern and Kings rivers. The divide includes the Kings-Kern Divide and the Kaweah Peaks Ridge. Many of the peaks that make up this divide exceed 13,000 feet, and make up a good part of the boundary that separates Kings Canyon from Sequoia National Park. 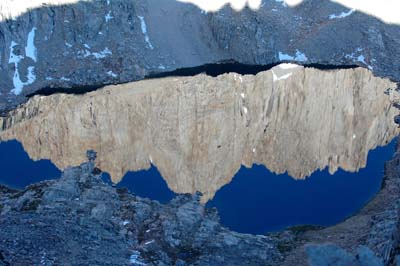 The area of Sequoia National Park that you are looking down into from Trail Crest gets very few visitors due to its isolated location, but the Kaweah Peaks offer tranquil camping, fishing and high alpine Mountaineering for those hardy souls that make the effort to venture into this remote area of the Sierra Nevada. If you are up to the task, and are prepared for a multi-day outing), there is a good trail that goes from Trail Crest (which is part of the John Muir Trail) that you can use to hike down into Sequoia National Park to access this section of the Sierra Nevada. You could also take a long trek from Giant Forest (on the Western side of the Sierra) for another great adventure. 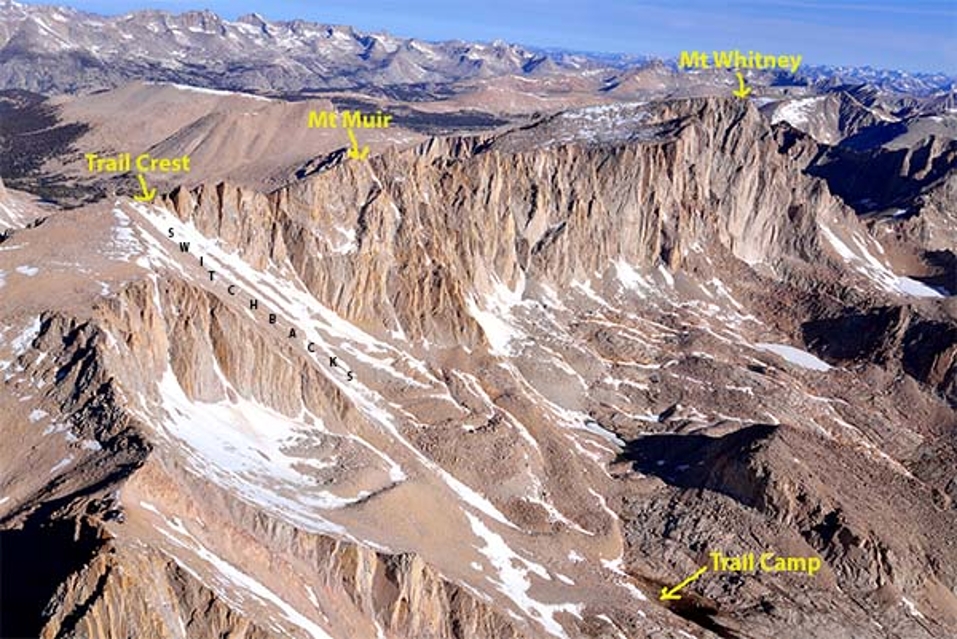 In the aerial photo above that I took in late May of 2013, you can see how Trail Camp in the lower right hand portion of the photo is situated in comparison to the up and coming 99 switchbacks that take you to Trail Crest. You can even see the little lake at Trail Camp if you look closely. This little tarn (or high altitude pond) is the last reliable water source before going on to the summit of Mt Whitney.

Mt Muir is a short distance from Trail Crest, and as mentioned above, the summit of Mt Muir is only a few hundred feet above the Mount Whitney Trail. It is a class three climb, so make sure you have the skills for this sort of climb before taking on the challenge. For more on climb ratings, see our web page on Climbing. 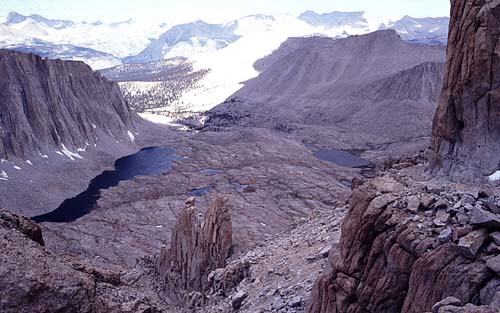 The image to the left above is a good view of what you will see at Trail Crest. The chain of peaks on the left side of the photo are the Kaweah's and they are part of the Great Western Divide as mentioned above.

At Trail Crest, most of the elevation gain is behind you, and the summit of Mt Whitney is not that far away, but the going is not easy due to the High Altitude, but keep at it, for you will soon be on top of the highest peak in the Continental United States!

Well, that's about it for Trail Crest on Mt Whitney. I found the view at Trail Crest to be about as spectacular as it gets in the Sierra Nevada, and certainly one of the great highlights along the Mt Whitney Trail.